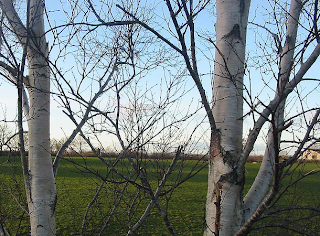 It was Dave's idea that we should try birch sap wine and he sourced the birch sap. Being a responsible sort of chap he took very great care not to damage any trees and he plugged up all the holes he had drilled.

Andy Hamilton writes on birch sap wine, "Any birch tree can be tapped, but ensure you tap an older tree of at least 25–30cm in diameter: any smaller and you risk damaging the tree before it has had a chance to grow."

The recipe was very simple. Boil the birch sap, let it cool down, add the juice of two lemons, sugar, a pound of chopped up raisins, a cup of strong black tea and the yeast and nutrient.

It went into the demijohn at the beginning of April 2012 and I bottled it last November. Dave and I split the bottles between us, three each. Unfortunately a couple of his bottles popped the corks. Possibly because they were stored in the kitchen and it was too warm. He lost a bit but drank what remained. I gave him another bottle at Christmas to make up for his loss. That left two bottles and we drank one tonight.

To start with it was fizzy. Why it hasn't popped I do not know but it is  delectable and, by far, the loveliest wine I have ever made. I wish I had a crate of it. Two crates even. It is a wine so delightful that you wouldn't even care if it wasn't alcoholic.

I can only hope that the late, cold Spring means that the sap has yet to rise so that I can make some more. And I think Bert should plant a birch wood.
Posted by Nelly at 14:59